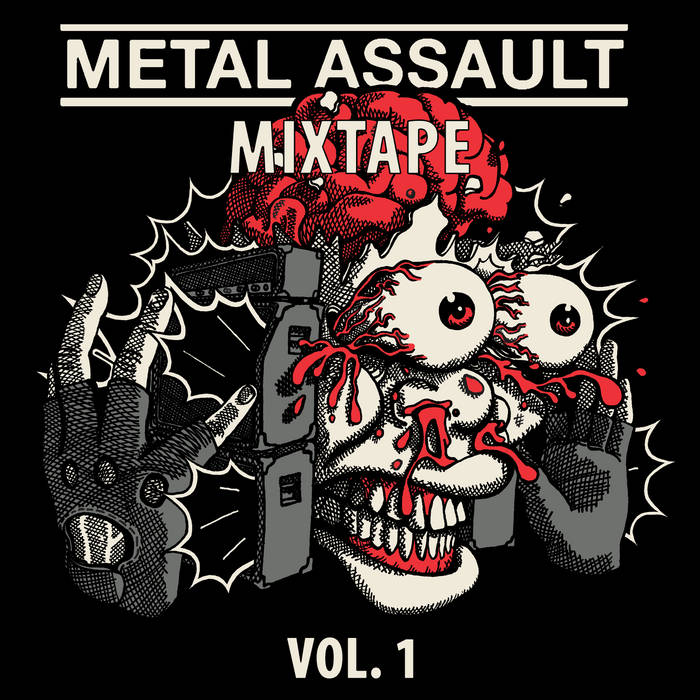 The mixtape was released on August 9, and on limited-edition cassette tapes which completely sold out within a day after release. The mixtape is now available via digital download only.

Below is the full track listing, along with a brief intro of every band.

1. Old Blood - Bloody Feathers: Los Angeles psychedelic hard rock / acid doom group Old Blood has undergone a major lineup change in 2019, with the exit of original frontwoman Feathers and the introduction of Lynx at the helm. "Bloody Feathers" is the band's first single with Lynx on vocals. This scintillaing new song marks the closing of the Feathers chapter and the beginning of the next one, and without doubt, the perfect opening track for this mixtape.

2. Tzimani - Carry On: San Diego hard rock / New Wave of Traditional Heavy Metal duo Tzimani released their self-titled debut EP in 2018 and is working on a full-length, but even whilst they do so, they delved into their vault and dug out a rare gem, "Carry On", which makes for a great entry into this compilation, with its catchy melodies and grooves that lend it that undeniable "instant classic" feel.

3. Hrom - Struck by The Dawn: Hailing from Calgary, Alberta, this traditional heavy metal / power metal group is a union of multi-faceted musicians that possess the remarkable ability to lend their talents to more than one band at a time. But when it comes to this sub-genre of heavy music, Hrom nails the hammer on the head and delivers the goods. “Struck by The Dawn” is epic old-school heavy metal at its finest.

4. Corners Of Sanctuary - Liar and a Faker: Formed in 2011 with the aim of revitalizing classic heavy metal, Philadelphia PA band Corners Of Sanctuary has gone from strength to strength in their 8-year existence thus far and shows no signs of slowing down. Reminiscent of the likes of classic metal legends like Iron Maiden and Mercyful Fate, but also a nod to modern-day stalwarts such as Spellcaster, Corners Of Sanctuary enriches this mixtape with a brand new song called “Liar and a Faker”, produced by the legendary Bill Metoyer, and an apt representation of all things great about classic metal.

5. Tyranis - Scarred For Life: Tyranis has been a well-respected and admired name in the Southern California underground heavy music scene for a number of years. Based in Orange, California, Tyranis delivers the knockout punch to bring Side A of this compilation to a close. No heavy metal mixtape would be complete without an out-and-out raw skate-thrash rager, and that is exactly what Tyranis brings to the table here, with the unstoppable, unrelenting, aptly titled new single, "Scarred For Life".

6. Haunted Garage - Surf Nazis Must Die: Legends in our world for more than three decades, Haunted Garage is a Los Angeles based shock rock / horror metal / crossover punk group led by vocalist Dukey Flyswatter, who is also known for appearing in several B-horror movies in the '80s and '90s. Haunted Garage released their iconic debut album Possession Park in '91 on Metal Blade Records and has released two EPs as well as appeared on numerous movie soundtracks. We are honored to have this band give us a brand new anthemic number, "Surf Nazis Must Die", to open Side B of this mixtape.

7. MX Machine - Devils Highway: MX Machine is a name that has existed since 1985 in the Los Angeles metal scene, and the band has rubbed shoulders with the who's who of the scene from back in those days. The name has very much been kept alive since then, thanks to their '88 LP Manic Panic, as well as sporadic releases and concert appearances, since 2007 in particular. Fast forward to 2019, MX Machine is releasing a new song called "Devils Highway", exclusively via this mixtape. We are all about promoting the Los Angeles metal scene and keeping its legacy alive, and in that spirit, we could not think of a more fitting band than MX Machine.

8. Zinngeschrei - Amok: Instrumental power trio Zinngeschrei brings together three talented musicians from three different parts of the world, and their eclectic, dynamic brand of musical creativity is very much a reflection of this fact. Inspired by and reminiscent of classic prog but simultaneously brandishing modern elements, Zinngeschrei has the power to enhance the quality of any multi-artist lineup or project they participate in, whether it be a live gig, or a mixtape like this one. Zinngeschrei lets their musical expression run wild with their compelling new single, "Amok".

9. Ancient Fears - Trial to Fire: Last but by no means least, is perhaps the newest band on this compilation. Witnessed by many in the city's heavy music underground but only as a mesmerizing live act, LA's own Ancient Fears makes its first attempt to capture their bestial intensity and mind-bending psychedelia in a studio recording, with the haunting debut single, "Trial To Fire". By far the longest track on this mixtape, it deserved its own space to breathe, and thereby it features as the closing track. Doom has a new synyonym, and it is Ancient Fears.

Bandcamp Daily  your guide to the world of Bandcamp